A presentation to University of Beijing marketing staff and students: China’s intoxicating mix of Wisdom, Mystery and Spirituality creates a unique and deeply alluring marketing opportunity for a new Brand China. Built by mystery, sensuality and intimacy. Fired by inspiration. 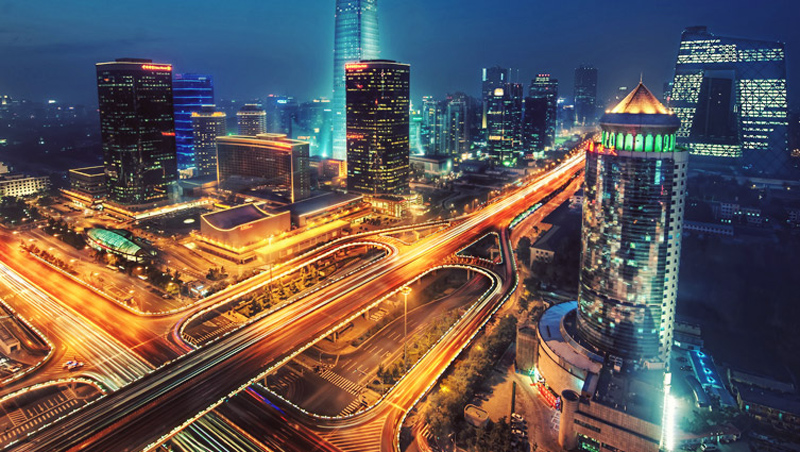 I’m excited to be with you this morning. I’ve been looking forward to coming to Beijing University for months and months. In fact, for years.

Twentieth century progress was led by American enterprise. Those days are behind us. This is your century. The Asian century. The China century. The century of China’s destiny.

Here at Bei Da, you are the future’s architects. Your challenge is simple. Design a better world. Build a kingdom of dreams to sustain humanity.

It’s a huge challenge, one you must rise to as China’s shooting stars.

Why am I here today? The New China and Saatchi & Saatchi share the same world-changing spirit. “Nothing is Impossible.”

At Saatchi & Saatchi we are revolutionaries in optimism. We were here in 1992, the first international agency to get a business licence. The most successful agency in China. Today we partner China in enterprise and progress.

My love for China runs deep. I was an early explorer through Deng’s open door. In the 1990s I built a $200 million brewery in Suzhou for my former company Lion Nathan.

Since 1978 a Tai Fun of change has swept through China. The industrial revolution here is the greatest in all history. River delta markets have opened. Average income per person has skyrocketed. Extreme poverty has nosedived. In 1981 64% of China ‘s people lived on less than $1 a day. By 2001, it was at 17%. 250 million people lifted from poverty is a very good thing.

Like all emerging powers, China has challenges. Economic. Social. Ecological. Cultural. One truth shines bright. Business is the engine of human progress. As entrepreneurs and marketers in the century’s central country, you now drive the big engine to market.

Maybe you’ve heard of Rewi Alley. The most travelled European in the Chinese interior. A lifetime friend of China . A hero. The man who introduced ‘Gung Ho’ to the West. He and I share the same New Zealand nationality. We share the same “Gung Ho” attitude. We believe in redefining boundaries, in emotional revolution.

I want to share with you two revolutions. One is in branding. One in management. I started both of them. Together, they change the world.

The first revolution is the future of brands. It is also the future of China . The story is told in our book: “Lovemarks: The Future Beyond Brands.”

Around the world, intense competition, product proliferation, products equal in quality and performance, price pressure and copycats have made every brand promise feel the same. What happened in Western attempts to get premiums is now happening lightening-fast in the East.

China’s early brand builders are already in price wars and turf battles. Overcapacity has reached 30% in many industries here. Electronic appliance prices are dropping over 10% a year. Auto prices fell 7% last year and the year before.

And every year, new locals, nationals and multinationals enter the ring. It ends in merger & acquisition. The auto industry here is a mature example of local / global marriage. The urge to merge travels fast and far. From TCL and Thomson to Lenovo and IBM to SVA and NEC.

Climbing on each other only delays commodification. In the end you tumble down. You get hit.

The way through lies beyond brands. Power has passed to consumers around the world. To stand out, you need deep emotion. Science has proved that humans are powered by emotion, not by reason.

Brain scientist Donald Calne sums up: “The essential difference between emotion and reason is that emotion leads to action, while reason leads to conclusions.” More emotion, more action.

Brands have invested billions in respect. This is no longer enough. Look at this Love / Respect axis: 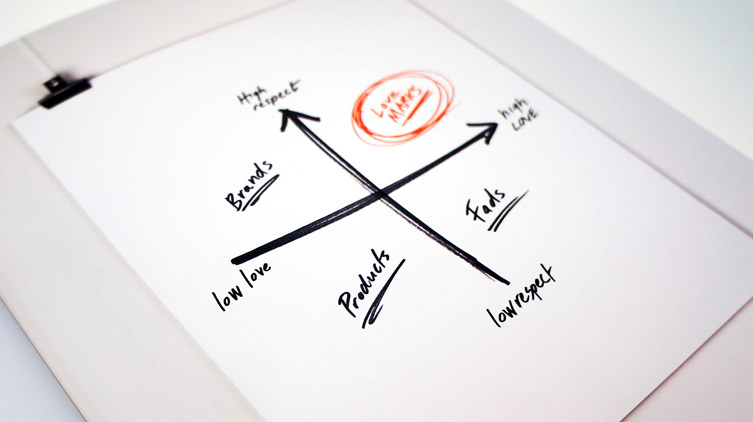 Here’s how we made a precision machine a Lovemark in Germany .

You recognize Lovemarks instantly whether you are in Beijing , New York , Sydney or Rio .

The most powerful marketing idea of the next 100 years is China itself.

It is Brand China . A cultural spring of immense power for building Lovemarks in China, for China and beyond China. A brand exported by a 1,052 million Mandarin speakers, a $1.4 trillion booming economy and over 5000 years of history.

Brand China can be bigger than Made in Italy, Made in Germany, and Made in Japan combined. With 60% of the world’s population in Asia, with a China-led ASEAN free trade zone by 2010, this brand will set the course of the 21st century. It is up to you how fast.

In 35 years of business I’ve never seen a brand with more depth and allure. This brand is cool. It is rich in the three essences of Lovemarks.

There’s former Procter & Gamble manager Wu Xianyong, the guy hired by Li-Ning to run marketing and branding. The guy who made sure many Chinese athletes used Li-Ning gear at the Athens Olympics, which boosted China sales. This is Brand China .

China ‘s outreach is just getting started. There are now over 90 million Internet users, four times more than in 2000. Seven years ago I shocked the US investment community by telling them China will become the world’s biggest advertising market in the next decade. Saatchi & Saatchi went to work signing up smart, ambitious and imaginative young local Chinese. The investment made Saatchi & Saatchi No.1. in China .

Today China is the third biggest ad market in the world. I’m counting on 2008 to prove my prediction right. The Beijing Olympics will smash all records.

You will carry China’s torch into the future, continuing Li-Ning’s vision that “Anything is possible”. To give you speed I’ll share my second revolution. It is called Peak Performance.

Peak Performance is about reaching and sustaining the highest levels of performance imaginable. It is a book, a theory, a practice, an attitude, a philosophy, a spirit that knows no boundary. It goes beyond management and leadership, both 20th century ideas.

Peak Performance engages the force of the future.

Peak Performance is about dream, challenge, focus and action. First you need an Inspirational Dream.

An Inspirational Dream is the most powerful force for change there is. I have seen wonderful things happen when people have the guts to live their dream. Martin Luther King didn’t say I have a business plan.

I joined Saatchi & Saatchi when the company’s dream was faxed to me: “To be revered as a hothouse for world-changing ideas that transform our clients’ brands, businesses and reputations”. My heart soared. My mind raced. How could I resist such a dream!?

To Peak Perform you also need a Challenge and a Focus. The challenge is the dream in action. Measurable, achievable, stretching, exciting. The Focus is what has to be done in the next 12 months, the next 100 days, right now.

The most important element is action. To Peak Perform you need to be an Inspirational Player.

1. Inspirational Players pursue failure. When I joined Saatchi & Saatchi in 1997 as Worldwide CEO I had never worked in advertising before!! Did that stop me? Not a chance. Nike is right: “there is no finish line”. Pursue failure doesn’t mean “keep on failing”. It means being competitive, passionate and restless like Zong of Wahaha. It means having the courage to take a leap of faith like Indiana Jones. So push as close to failure as you dare. And learn from it when you push too far!! Like Lenovo did a few years ago when it diversified too fast. China ‘s brands will make it because they understand a principle of life. A genius is a person who makes the same mistake. Once!

2. Inspirational Players fall in love with ideas. The Knowledge Age is over. So is the Information Age. This is the Age of the Idea. The time of designers, artists, inventors, empathizers and storytellers. China has world-class competence in manufacturing management. What will count most in making and marketing China ‘s Lovemarks are higher concept abilities. Non-linear thinking that is difficult to copy. The ideas and edges that come in a flash of inspiration.

3. Inspirational Players Act local and Go global.They stay true to their local yet they have the courage to take it far. Every competitive advantage starts deep in the local. The challenge is to act-and-go not reason-and-stay. Yes get your thinking straight! The key is to distil the mystery, sensuality and intimacy from your local and move it lightning fast into the global!! Brand China has enormous local reserves to work with. China ‘s brands are actually trained to Go Global, having lots of experience with price-sensitive customers and tough distribution markets. The great challenge of enterprise is not to think!! It is to dive into the deep emotional power of your local.

4. Inspirational Players Explode Paradox. Choosing between opposing forces limits possibility. Innovation and reducing costs. Young and old generations. Short and long term.. Don’t settle for “Either / Or”. Inspirational players refuse to make choice. They work with two competing ideas in all their complexity with equal passion and resolve. Instead of getting the best of neither, you get something better than both. The Spanish Emperor Charles V understood the power of paradox. He said “I speak Spanish to God, Italian to women, French to men and German to my horse.”!!

5. Inspirational Players Make the World a Better Place for Everyone. Inspirational Players change the world. I believe it is the job of us all to help make the world a better place. None of us is as strong as all of us! But paradoxically it is the Power of One that makes this true. Like water wearing away a mountain one drip at a time, there are few problems that can’t be solved if enough people commit themselves. From AIDs and poverty to water sanitation, war and pollution, we must fight together for an inclusive world. The race for an inclusive world is not a competition. It will be won in the human heart. Before the race has begun.